More than a month ago, I was planning to write a post about Casey and all her “big girl” accomplishments at the time.  So better late than never, and with new and improved big girl-ness I’m finally getting to it.

Basically, within two weeks, (and about two weeks before her 3rd birthday) Casey started sleeping in a big girl bed, potty trained and started dressing herself.  At the time, I couldn’t believe it was all happening so quickly and it was relatively painless.

One weekend, I just decided it was time to take the front off of her crib thereby turning it into a big-girl bed.  I removed a few screws and Casey was so happy and jumped right in her bed. 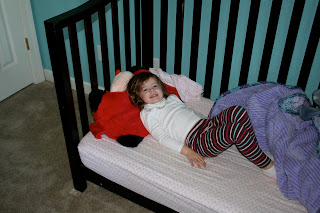 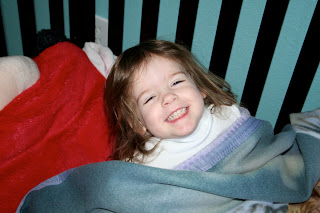 I thought bedtime was going to turn into a struggle but it really hasn’t.  She still goes right to bed and even if she needs to come out, she yells for me instead of coming out on her own.  Usually she doesn’t need to come out as much as she needs me to fetch her hole blankie for her or her pillow pet or a specific baby.  Most of the time she still yells for me in the mornings too when she wakes up…although I would rather her just come into my room so I can turn on the tv and lay in bed for a little while longer.

The downside of the big girl bed is that she doesn’t nap every day anymore.  Ever since we took her pacifier away, her naps haven’t been great but now she doesn’t take one at all sometimes.  I really thought I would be so sad the day that naps went away but I’m finding it gives me a lot more flexibility and time to get errands done if I need to.  I’m no longer a slave to being home between 1 and 3 in the afternoon.  But, most days I am home and I try to get her to take a nap.  Sometimes she’s just not going to take one.  Usually she has to use the potty 2 or 3 times on those days, spaced out about 20 minutes between each trip.  Sometimes I give up at that point and other times I yell at her and she finally takes a nap.

If I think about it too much, I get sad that she’s not the amazing sleeper that she used to be.  Every since she started sleeping through the night she’s been a great napper and for a long time she slept until at least 8am every morning.  Lately, she’s even been waking up before 7 which was once unheard of with her.  But, I’m sure as she gets older she is needing less and less sleep.  On days that she doesn’t nap though, it gets pretty obvious that she needed one by about 4 or 5pm.  She gets dramatic and grabby and cranky and is constantly being a little bug to Jack.

Fast forward to this past weekend and she is now in a really big big-girl bed.  The back of her crib is now the headboard to her new bed.  She has a pretty purple comforter and some pink sheets and she is a pretty happy girl.  Now we just need to work on keeping her in the middle of the bed and not falling on the floor.  And I need to recenter those pictures or find something else to put on her walls.  The beautiful orange piece of paper on the wall is some original artwork by Jack.  It says To Casey From Jack and has a picture of Casey that he drew.  As soon as I said I was going to take some pictures he ran to create this because he thought the room needed a little more decorating. 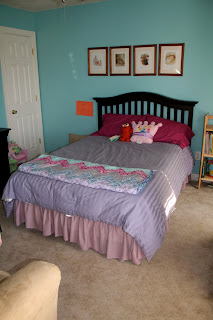 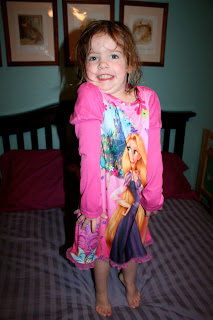